On the one hand, the Squadron Strike variant for Traveller is not out yet, but even that, which explicitly went for fleet-ship combat rather than player-scale combat, is a completely different beast from old-school traveller.

Traveller was created and conceived before blockbuster space movies. It’s a product of the ethos running through a great many science fiction novels from the fifties and sixties, so things just don’t play out like what you see in Star Wars, Battlestar Galactica, and Star Trek II. A High Guard fleet battle will run for days as the titanic battlecruisers slowly grind each other down. And the small ship engagements depicted in Mayday and the original Starshipsbooklet…? They’re something else entirely.

Everything comes down to the cold logic of the vector mathematics. There a no fancy maneuvers that can turn things around in a dramatic way. If someone’s gunning for you as you attempt to make it to the safe jumping distance, there’s nothing else you can do except shoot back and hope you make it. For someone expecting Star Fleet Battles or The Last Starfighter… this is going to be especially excruciating.

A look at the rules, and playing out the consequences solo, reveals a vastly different game, damn near simulation, than Starfleet Battles or Federation Commander, or Talon, or X-Wing. Sure, you’ve got reactionless drives capable of several gees of thrust and jump-tech, but there’s very little fancy dogfighting, and the speed of light is a merciless bitch. With the distances and accelerations involved, dogfighting isn’t even an option. You don’t have to be very close before an optical or radar tracking system has a low enough return latency that an accurate turret drive can hit even a small ship before it laterally dodges out of the way. Sand is much more useful than it otherwise looks, and it’s the epitome of long stretches of boredom followed by moments of sheer terror. A lucky laser hit can disable something critical -otherwise it’s a slow death by a thousand cuts, or a missile takes you out hard.

The first hard hit usually wins the engagement, but if both sides are playing with missiles, you can still get taken out after “winning.”

In a role playing sense, this gives an opportunity for the crew to come up with plans, or die.

But then, this is a game where you can die before you even start to play. 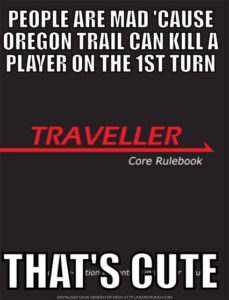