I’d heard that some, Like Owen Benjamin, have run-ins with pedophile defenders, and anyone paying attention knows that outlets that can reasonably be referred to as “mainstream” like Salon have put out articles defending pedophiles. I haven’t had the… no, it’s not “pleasure”… of running into anyone so willing to minimize or outright defend pedophilia. Until last night.

Had a run-in the other night with someone I considered a dishonest hack of a pedo enabler.

It started with a reply to a post I’d replied to a Thomas Wictor thread. 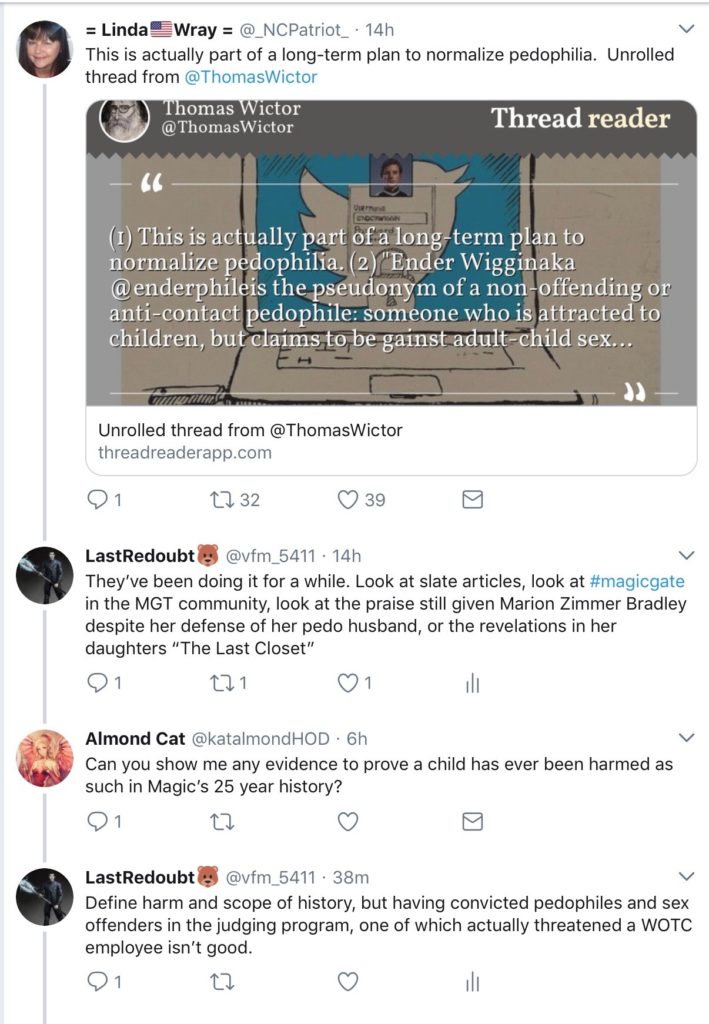 Strange. “Can you show me any evidence to prove a child has ever been harmed as such in Magic’s 25 year history?”

Lots of children have been harmed. Wars, falls, sports injuries.

Yeah, I know, the context, but that was just weird, so I asked her to define “harm” and “scope” – i.e. what she meant by harm and by MGT’s history. 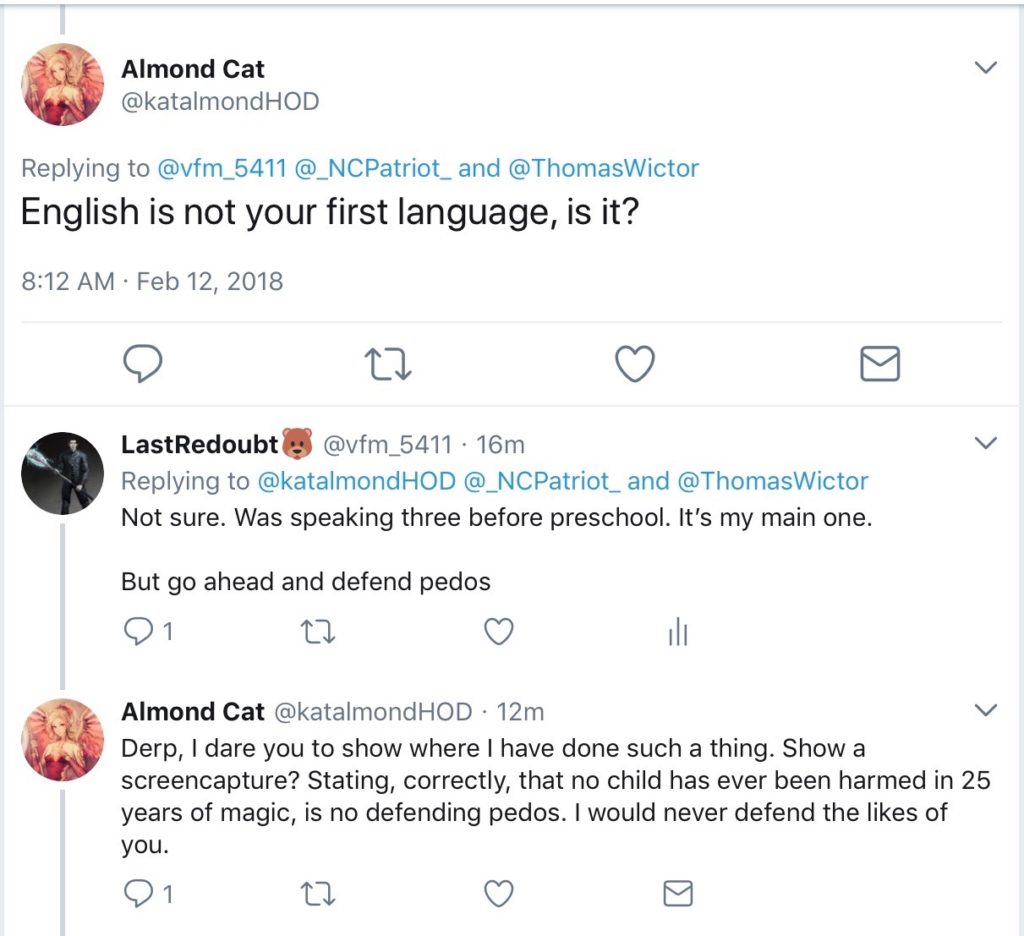 A variant of “you don’t understand english” when asking for clarification on an incredibly vague request that I dearly suspected was just an attempt to play games and deny, obfuscate, and minimize rather than an attempt to get an answer, and there you go.

The entire thread started because she replied to a bald statement of fact, that a number of communities were hiding, minimizing, even lauding pedophiles, with “prove they’re harming anyone.”

If the point is I’m wrong in their existence, then I’d have to show that they exist – but that is not what she’s arguing.

Yup, dishonest hack. This is where the odd specificity starts creeping in. If she’s arguing that no-one who’s played magic in any context, private or public, has ever harmed kids while using the game as one of their tools to meet, groom, and isolate kids, she’s almost 100% guaranteed to be wrong.

As would be guessed from the context, and odd specificity beginning to creep in, it soon turns out she isn’t talking about M:TG play in general. 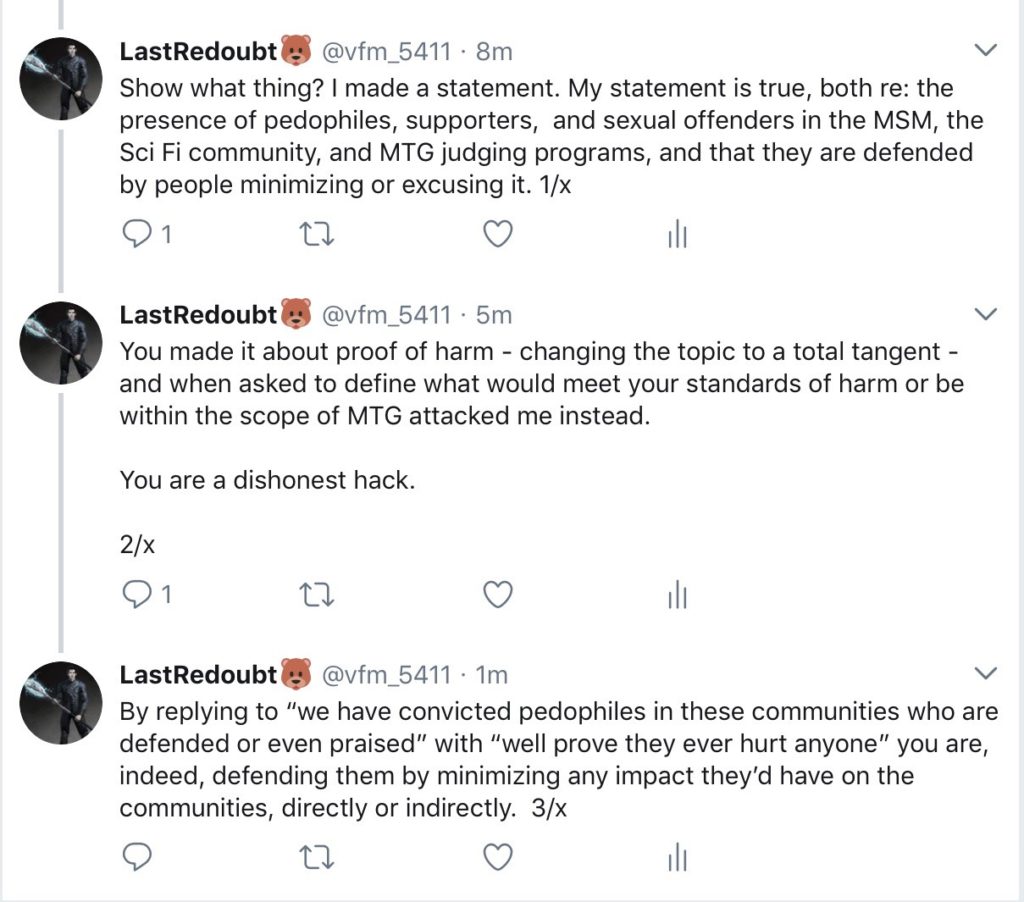 So. What does she reply? 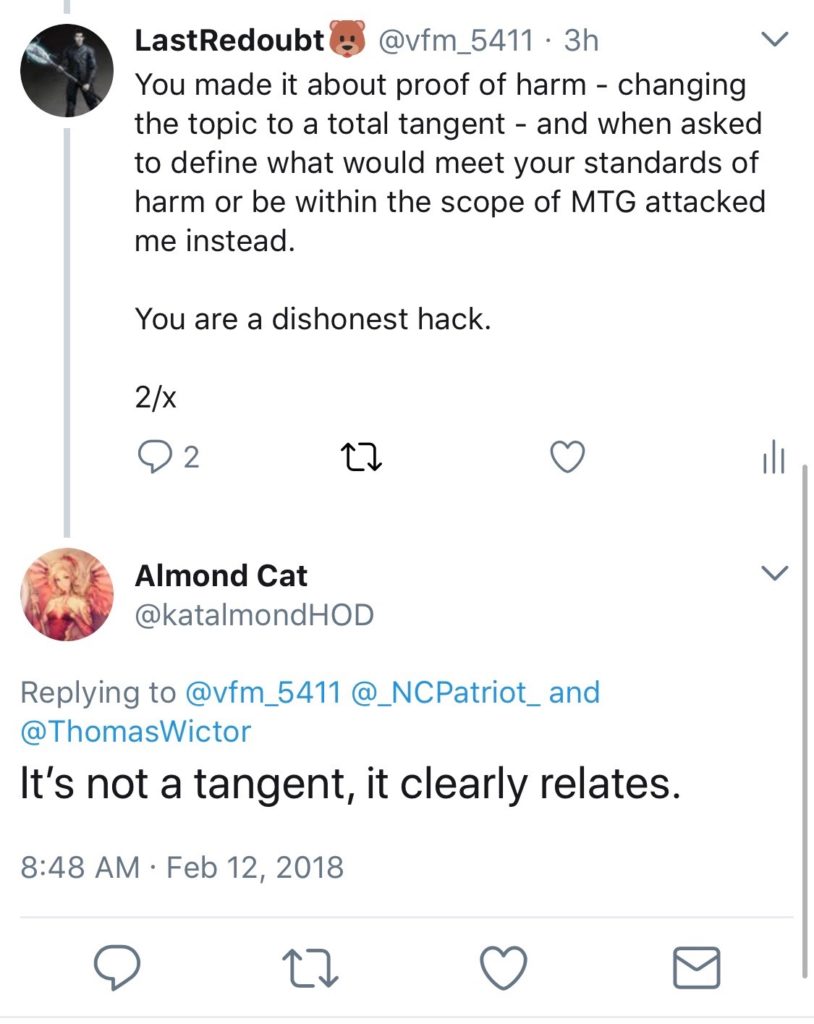 Yes, having pedophiles around means having people around who want to abuse kids. Not post-pubescent, but actual kids. This fucks them up for years. Given the presence of convicted pedophiles in the judging program, these are people who actually do abuse kids.

It is, indeed, related, but that wasn’t what I was talking about.

The very fucking definition of a tangent. 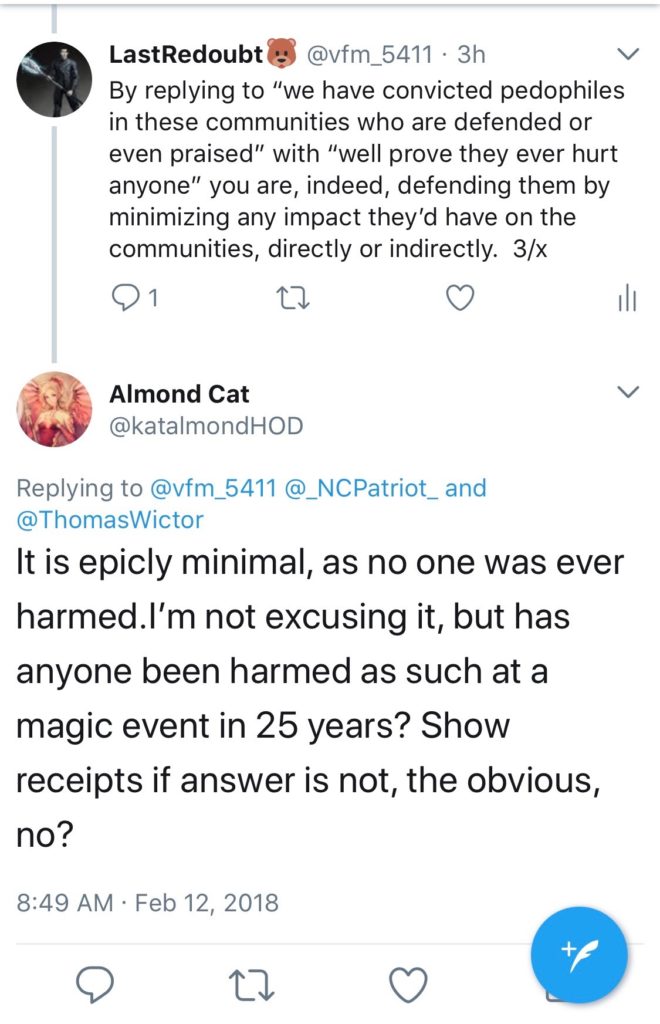 Here is where things get strange. And I’ve looked at her stream – many, many insistences that no-one has actually been harmed at an M:TG event. “Show receipts” – with several dodges that if the receipts for purchasing magic cards or tourney attendance cannot be shown for an event where something may have happened, the people may have been there for pokemon or something. (edit - and of course being literal, missed that it's slang for "show proof")

In short, in reply to a statement that there are pedophiles in a number of communities that have at the least minimized their danger, if not outright defended and promoted, or even still laud them, she comes back with “but no one was harmed at a MTG event while actually participating in it”. In other discussions she insists on being given timestamps for videos because she’s not looking through them for the proof, exactly the kind of reply I was avoiding by having her commit to meaning. But for her to (supposedly) admit she was wrong about M:TG being “safe” someone would have to show that someone was actually harmed at an event, and that it could not have been a community-related event as shown by the appropriate receipts, etc.

You know, evidence that rarely is ever presented by the victims even when there are convictions.

There’s an extent to which I think she’s M:TG focused, especially hates Hambly, and is more concerned with defending M:TG as wholesome and virtuous than pedos in general, but I don’t care. Because she’s trying to pretend like having convicted pedophiles hanging around a game that yes, has adults, but also has a lot of kids (and pedos love to flock to where there are kids, by their own admission), but not having the assaults happen at the tournaments means there’s not a problem. She’s ignoring how they work. I seriously doubt that any pedo assaulted a kid at a structured and sanctioned event. Instead, they would be used, much like Breen used to meet kids to groom them at Bay Area SF conventions, a place for them to meet kids with a builtin excuse to break the ice, and more the local events. And they groom the kids over time, not over one tourney. And many, in general, aren’t caught for years. Or ever.

So yeah, ask for an impossible level of proof given how the criminals behave, and declare that there’s nothing to see because one specific thing didn’t happen.

And no, I’m not kidding. She’s full of shit and she knows it, because there have been issues within the community if not the incredibly narrow and specific one she claims is the only evidence acceptable that there’s actually a problem. And the self-policing she claims happens can’t help much when overriden by higher authority within the community.

There’s conclusive proof that WoTC and the M:TG judge program had been warned about convicted pedophiles and hadn’t scrubbed them or kicked them out until the publicity from Hambly and MSM notice shined enough light on it.

There’s the fact that convicted pedophiles had 5yr suspensions when Hambly, who can be and has been an ass, but generally a truthful one, was banned for life.

And yes, it literally took the M:TG judges longer to decide to kick out a pedophile for any length of time than a guy who accused a woman of taking advantage of men through charging for pictures of sexually charged costumes and poses.

And lest you think that it’s about protecting the wimmen from those eeebil men:

A player named Lucas Florent was banned for life after he threatened to rape one of WotC’s employees, Helene Bergeot, in November 2011. Florent said he was not acknowledging the ban and that he intended to attend the next MTG event which, at the time, was going to begin a few days after he made the statement. As a result WotC announced they were beefing up event security to protect their staff and protect their players. Florent’s threat was taken seriously.

And then, do you know what happened? It is the strangest thing. Without any public notice WotC reinstated Florent’s ability to participate in MTG events in September 2012. Helene Bergeot said she was not consulted on the decision and neither was the Investigations Committee. The decision to give Florent a reprieve came directly from the corporate office for a reason which has never been explained by WotC.

Imagine that. A player who literally threatened to rape a WotC employee was reinstated without the consent of the employee subjected to the threat. If that’s not the most uneven, backward, inconsistent enforcement of rules put in place for the alleged safety of players I don’t know what is.

I’m a pedophile, but not a monster.

Niche Gamer articles (long, but thoroughly researched, with a lot of links to official sources and documents):

And a Breitbart article from early in the whole affair before Jeremy started firing back for hypocrisy, and discovered the pedos.