It’s been a long while since I’ve tried my hand at this kind of stuff. I sketched like a maniac underway, and even went and bought a copy of Lightwave 3D ca. 2000 to do some modeling work that ended up getting integrated into a couple projects. Nothing big, and I didn’t keep at it.

Yet, despite having sketched, and inked for years, and even buying a couple Wacom tablets, somewhere around 10-15 years ago I mostly stopped. Life, family, and lack of time to focus – the latter mostly being my own damn fault for reasons I don’t care to elaborate. Dipped my toe in every now and then, but it will indeed be some work to get back up to where I was, which while it was talented amateur, never quite was the level of speed and polish of some I’ve directly known (and who now waste their skills doing some truly ugly stuff…)

In all fairness, especially the last few years, a huge part of it was also spending a lot more time thinking, writing, collecting thoughts

So 15 days in and it’s a bit late to start, but as good a time as any to dip my hands back in. It’s a quick sketch “inked” with a bare minimum of detail but decided it was better to “finish” it than to overdetail it. The design owes more than a bit to Traveller. 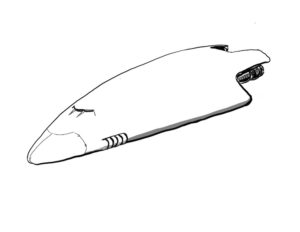