The usual art post may slide into Tuesday as I got a bit distracted.

I finally received my copy of the third edition of Triplanetary, brought back to life by Steve Jackson Games via a kickstarter project. Unlike the designers edition of OGRE, they’d learned their lessons and didn’t suffer from a year delay which the previous project had due to its near-catastrophic success.

The game has a long history – and is one of the first games designed by Marc Miller of Traveller fame (also, the author of the excellent Agent of the Imperium set in the same universe).

The components are interesting because of how movement is handled – a vector system which, relying on hexes rather than lines and protractors, uses lines drawn on the board with dry erase marker. The original game used acetate, per Infogalactic (haven’t owned it or seen it), the new edition uses a glossy board with a coating similar to that used for Talon ship chits – and hopefully SJG learned from GMT’s experience – though so far everything has erased cleanly. The chits themselves also erase if accidentally marked (at least the fronts do).

And the board is large – though the chit count is fairly low. The last is in part because one doesn’t need multiple chits to track current vectors, plotted acceleration, and so forth. Despite the size the board scale isn’t accurate for placement of moons, planets, or even orbital distances (it takes six days to orbit a planet – must be a far parking orbit), but the relative positions are such that at least the flavor of inner and outer (Jovian) systems is retained.

The movement rules are simple – I’ll likely go into detail of a ship wending its way through the Jovian system in a separate post – as are the combat rules. Like OGRE, it’s based on ratios of attack vs defense values (though defenders get to counterfire) with results including “no effect”, explosion, and the ship being temporarily disabled – unable to move or fire – for 1-5 turns. “Disable” results can be repaired, and are cumulative, so if the total reaches six, the ship is totally destroyed. While disabled, a ship can be looted for fuel and whatever is in the holds if the attacker can match course. While the scales, as noted above, are a bit wonky, you can actually go into orbit simply using the movement mechanics without having to apply any fudge factors or separate rules.

The basic combat system elegantly encapsulates a number of ship design assumptions with far less fuss than Attack Vector:Tactical (which makes Star Fleet Battles look simplistic). The attack / defense value encompasses factors like structural strength, ECM, and offensive railguns and lasers, and ships with hold space can carry torpedoes, nukes, and mines. A die roll, modified for distance and relative velocities, is used to look up the damage on a table of ratios between the attack and defense values. The advanced combat system looks like a direct precursor to the basic spaceship combat system in 1st edition Traveller though my understanding is that it isn’t. Sure, you still use ratio tables and a modified die roll vs a “to hit” roll to determine the number of hits, but then you roll on a table to see what is disabled – drive, weapons, structure. My only gripe about this is that for one of the included scenarios, the pilgrim’s escape, it may weigh the game in favor of the pilgrims because a “disable” result only renders one system ineffective, rather than all of them. That said – it’s balanced to a degree by the extent that damage control parties can only repair one type of damage.

Speaking of scenarios – several are included, from an introductory two-player scenario, to explicitly multiplayer scenarios, including a “race” scenario that scales up well past 3-4 players (and optionally can include combat). Suggestions for campaign rules are included, and the system is simple enough that it would be easy to create additional scenarios for the game.It is eminently expandable. For example, something approaching a more realistic map of the solar system.

Below are two shots of the game board from the “grand tour” race scenario. Yes, one of the ships overshot the orbital slingshot and had to loop back across its own path around the sun. The colored zone outlines around the planetary areas mark the detection radius of orbital an 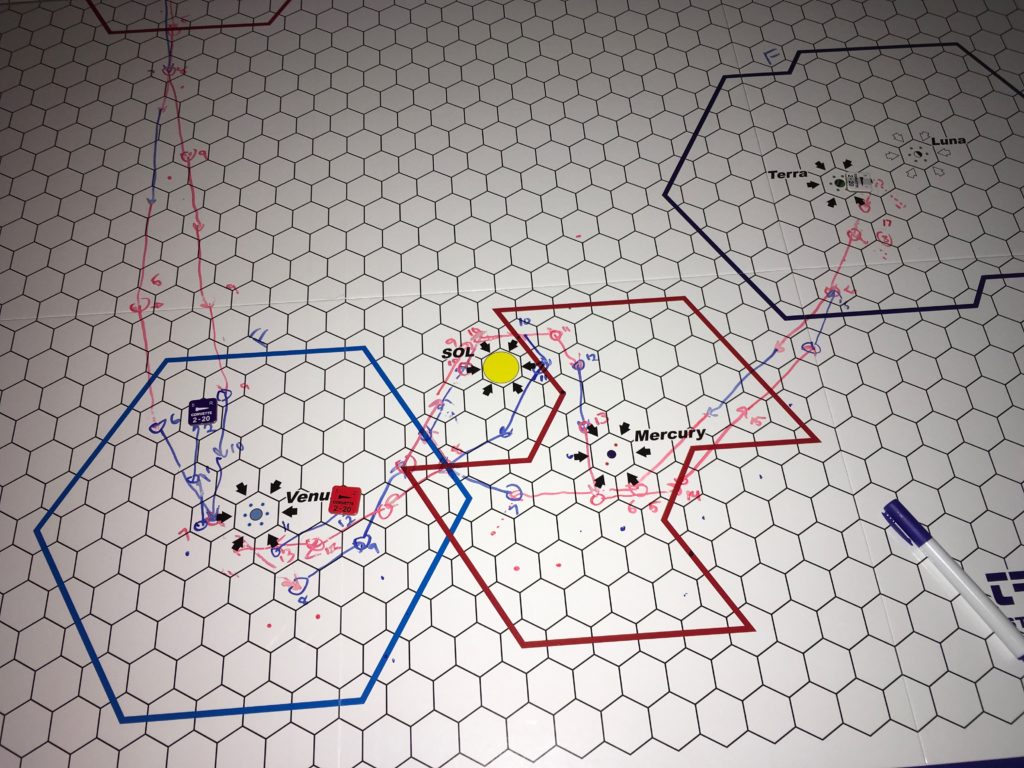 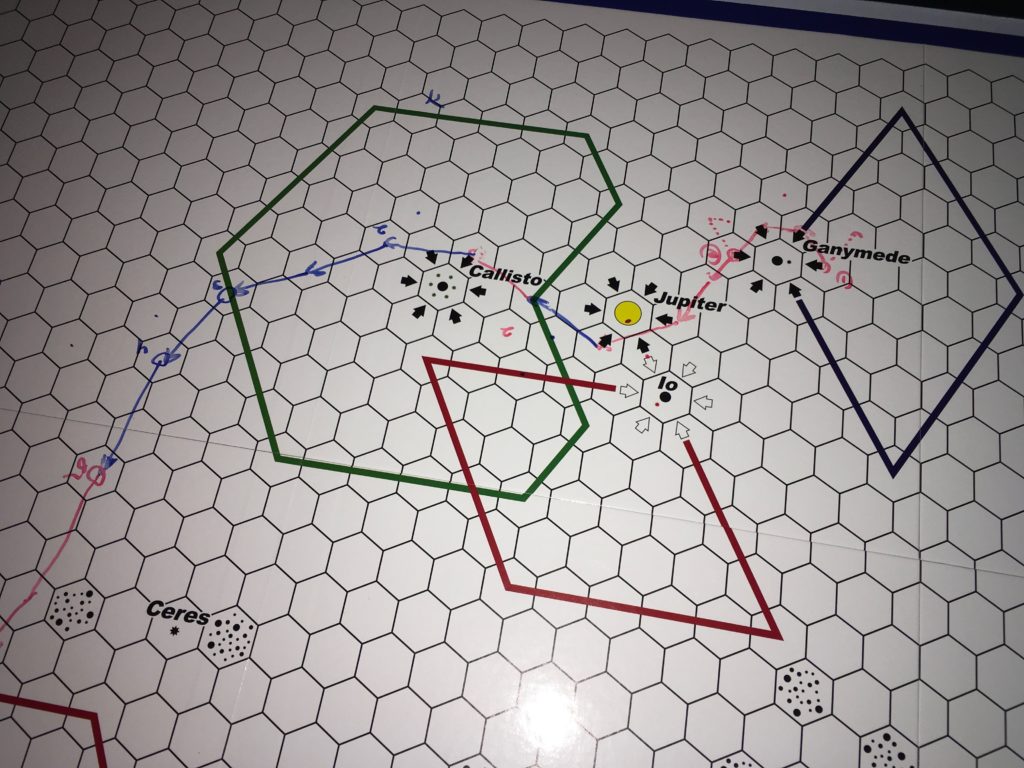 Rules, and some additional resources are available at the official SJgames page.