There is a lot of material to mine regarding the reactions on the left to the latest “Muh Russia” kerfluffle. Feel free to take a look at what Stefan Molyneux, and Scott Adams, among others have had to say.

I wouldn’t call it joy.

There’s something small and petty about it.

Think to the scene in The Lion, the Witch, and the Wardrobe where Aslan was killed.

They didn’t just kill him. They tried to humilate him. They tormented him in small and petty ways while taking joy and pleasure in the downfall. They went out of their way to add to the pain. It was nothing new to human nature of course – as the same aspect of humanity has been observed since at least biblical days.

The left of course believe Trump is evil and incompetent, in the face of all the evidence to the contrary (I’m amazed they can still keep that movie running in parallel but then they buy into socialism. Homeschool or die). So perhaps they take it as deserved schadenfreude, but, especially in the case of Colbert, it’s not just joy that something embarassing happened to Trump or his associates, he’s piling on, getting in a few kicks for good measure. The more I watch the more convinced I am that he’s a small, petty, snake, and not simply a dishonest hack.

It’s not enough that someone failed – or is perceived to fail.

No, he’s gotta give them a little extra push when they’re already falling.

And I realize that there are people I considered at least friendly acquaintances that lap this shit up. And laugh.

No, it’s not just the politics. That snortable chocolate stuff? he made fun of that. No, it’s not the fact he made fun of it (or tried) – if there was ever a product or its promoter destined to be mocked, that was it – it’s that the jokes were painful, predictable, exactly the same kind of crap he says about politics.

He had a font of endless humor handed to him on a silver platter, and pulled the equivalent of striking out in tee ball.

He’s a small man, and nowhere near as clever as he thinks he is. 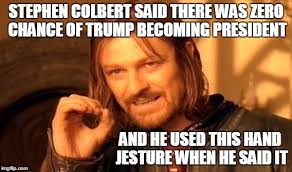