I recently wrote about how Apple, despite the technical momentum and inertia it still has, is already being affected by loss of both product and technical focus as it spends more and more time virtue signalling by working to have “diverse” presenters, a “diverse” programming staff, and expanding their product line.

And sure enough, the iPhone release and iOS 10 update proved my point.

First – we had a few update issues in the early hours of the iOS10 availability that caused a small percentage of phones to brick. I say small in the overall scheme of things, but large enough that it was reported, and caused people problems. As things go, it was actually not a problem with iOS10 itself, but an issue with the update servers that was quickly resolved.

Should it have happened? No, but it’s not unheard of, and frankly, pushing out major updates like this is what we call “non-trivial” – note that most android manufacturers, never mind the carriers, effectively don’t do the update thing. In isolation, it would be annoying, but…

The new iOS was released. It was presumably beta-tested. Yet T-Mobile is now recommending their customers do *not *update to iOS10 if they own an iPhone 6, 6plus, or SE. “iOS 10 is causing those three iPhone models to lose connection to the T-Mobile network.”

While there is a temporary workaround (reboot the phone) and Apple and T-Mobile are working together to get it resolved via software or carrier-side fixes, and again, it’s not unheard of in isolation….

Let’s talk the iPhone. I’m not even going to argue the whole “no headphone jack” decision – I’m personally neutral. I get some stuff needs to be deprecated but that throws out interactivity with a lot of stuff out there. Sure, they provide one free adapter and lightning earbuds, but people need to charge the damn thing while listening to it sometimes…

No, this is even more subtle.

So one of the new features of the iPhone 7 is the “taptic” home button. Basically, the home button no longer is a mechanical button, but “clicks” by kicking off a little tactile feedback device. This was apparently to deal with a huge chunk of the non-American market that, due to a few failures of the home button, actually use an accessibility feature to enable an on-screen home button.

Well… we can deal with not having the fingerprint sensor work when sweaty, or wearing gloves, but keep in mind, these trackpad-style surfaces need skin contact. 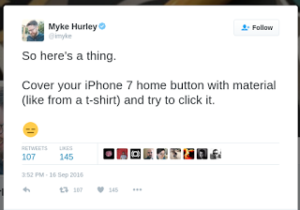 Seriously – I know Jobs is famous for some really weird fucking design decisions. Some, like killing ADB ports and the floppy drive were needed, and worked out in the end. Others, well, you either wanted to use a device that way, or you didn’t. Some post-Jobs even made a half-assed sense, charging the new generation mice and the pencil is annoying, but at least it’s quick. To me, the headphone decision, even if it’s “wrong” falls into this “we made a deliberate choice” category.

But the home button? What fucking moron didn’t think to ask about how people working out, or in winter north of the Mason fucking Dixon line were going to open up their phones?

Not a single one of these in isolation is more than an embarrassing blip. Taken together in close conjunction, and the pattern emerges that Apple is no longer as focused on quality of product, whether or not you agree with their vision of said product.

Hmm – Tim Cook is a great material and logistics guy, but what have he and the company been focusing on other than just “awesome product!”? (SJW Convergence and virtue signalling ruin everything….)

And while I’ve been a mostly-Apple guy since my first highly modded II+, I’ve got a lot of time in Windows and Linux as well – and so I’m not above laughing at Apple, or myself.  If you don’t mid a little simply wrong humor…. (don’t say I didn’t warn you)

Still not sure if and how I’ll jump ship. For mobile, Android is the only other viable option for my requirements, and hardly a privacy/etc. improvement, though outside of that Linux could handle most everything else (I usually keep one up in VMWare and do roughly a quarter of my work there), with a VM for MacOS or Windows as needed. Also, it’s not like the other hardware manufacturers are becoming less mediocre…