Often enough one hears from moderates and those who think they are wise, that the truth is always somewhere in between.

It’s an attempt to sound clever, to sound like maybe they don’t have everything right, but you certainly don’t either.

The simple answer: the truth is.

The truth is often far more complex than we can process with many facets, value judgements, and factors that interact in many ways. The truth of poverty is that there are those who, due to advances in technology and changes in manufacturing, or sickness, or something, are screwed, and will need, through no fault of their own, charity of some form. There are also those who are lazy, who given the opportunity to work, will not. One example is asking a street corner beggar if he’s willing to work for a meal instead of begging for change. The ones scamming you, getting a few bucks for booze or doing far better than they present themselves, will tell you to fuck off. The ones in need who are willing to do their share will say yes, and will be grateful because you let them do something to earn the charity.

This is much like the arguments of post-modernism that there are an infinite number of ways to look at something, so they then further conflate it with the claim that none of them are privileged, or better than the others.

I’ve discussed elsewhere that categories for things, like “music”, “fantasy”, or “science fiction” can be fuzzy, such that two things can legitimately claim that label and share few if any common points.

Yet, a book is not an ocean liner. The things we call “books”, unless we arbitrarily label anything and everything a “book” because we do not care to communicate ideas to people without developing a new vocabulary, share a set of features readily and quickly discernable from those shared by boats, ships, or ocean liners. 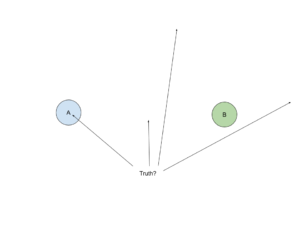 Thus with truth. Sometimes, both parties are completely wrong. But if you drew a Venn diagram, the truth won’t necessarily be between the two circles. It may be, much like the left-right definition used by the political left where Nazis – creatures of the left –  are on the right, and libertarians are outside the bounds of their political scale. Or it may be completely tangental.

Or it may be that one side is, within a reasonable approximation, correct.

Moderates like to say this bullshit a lot, and like to believe that by being in between, at neither extreme, that they are more correct (and smarter than everyone else).

The world doesn’t care. A book is not a ship. Or an airplane.