This is a tale of two games that I am, sad to say, disappointed in.

Ogre, by Steve Jackson games, has a long and storied history. I went in for the Kickstarter, and am – shipping delays aside – overjoyed at what I received. Even the 6ed boxes are well worth picking up. As a result, I was happy to hear that a new, updated computer version would be released.

What we received was well rendered, with nice sound effects, that consistently applied the rules of the game, and… is still buggy as hell. Especially for multiplayer play.

I’m including the lobby not reliably showing my friend, the game randomly hiding units from each other that were literally within firing range, games crashing out on loading, games crashing out after several turns of play, and in one case dumping out one of us and when rejoining, all the pieces showing up as the wrong unit.

I love the underlying game – OGRE is a near perfect blend of old-school counter-and chit wargames. As opposed to Battletech, Car Wars, and Star Fleet Battles, the only unit on the board that has multiple hit locations and weapons systems is the eponymous cybertank – the stats for all other units are abstracted to a level equivalent to classic Avalon Hill wargames but without the manual or three of rules involved with the more complicated ones like Advanced Squad Leader. It provides for fast play, yet each unit type being different enough that it matters how they are employed.

But I cannot, in its current state, recommend the computer version.

Experienced software development company Hare Brained Schemes – who developed Shadowrun Returns as a love letter to the old future fantasy RPG and SNES game – decided to tackle creating a turn-based computer game based on the desktop/wargaming franchise. After a number of legal issues documented in part by Razorfist due to Harmony Gold’s shenanigans, the game was finally released.

The game itself, especially in head to head multiplayer/skirmish mode, is excellent. Sure, the damage values are scaled up from the original – keep in mind I had the original edition of Battletech back when it’s previous pre-Lucasfilm iteration Battledroids could still be found on the shelf – but proportional. It’s turn -based, movement, facing, and heat still matter. The expanded initiative system that gives a higher base initiative to light mechs rather than simply picking which player moves a mech first still retains the overall trade-off-moving-mechs of the original. Perhaps the wonkiest but survivable change is that movement, rather than simply reducing hit odds, generates “evasion”. Having high evasion means that many attacks and a higher percentage of missiles, miss – but every attack on you, or a sensor lock, drops your current evasion stat.

The campaign itself is reasonably solid, though some missions end up being much harder than their predicted rating. I had one assassination mission where the target never was more than one round of movement away from their evac zone. Like X-COM, you soon learn to absolutely minimize damage taken as the several hundred thousand a month for operations plus the 100k+ replacing a damaged limb can run, nevermind two, can easily outstrip your earning potential especially once healing and travel/repair times are factored in.

Absolutely pick up a couple spare pilots – but not too many given monthly salaries – and keep an extra mech or two handy. Salvage, especially of expensive to replace weapons, is a godsend. Last, but not least, spread out your training because if you’re always waiting on your core crew, you’ll enter a financial death spiral.

Which brings me to the biggest single complaint I have about it as a game.

Look, I get it. AI is stupid (weirdly, I usually do better against people than AI….). One usual trick short of outright cheating on damage and hit percentages (which this game does not appear to do) is to outnumber you – which this game often does. I could get that, it’s not the part that annoys me.

It’s this – you’re playing a merc company. Surviving to fight the next battle is key – you cannot make every fight a desperate last stand, and I’ve pulled out of a couple that went pear shaped. The AI though? Excepting assassination missions where the target himself will run, it has no such compunctions – and even on those the ancillary defenders won’t break and run. There is absolutely no indication that the forces you are facing have any sense of strategically husbanding forces.

In and of itself, as a game, especially multiplayer one o none, it’s solid. It feels like classic Battletech.

The thing is, there are factors outside of the game itself.

Let’s just say HBS has some…. leftist… leanings. If you’ve played SRR- especially the followup Dragonfall – it’s pretty damn obvious. In SRR, the themes were baked into the story and kindof made sense from the standpoint of the existing Shadowrun themes.

In Battletech, it’s up front, in your face, and worse, utterly pointless virtue signalling that has absolutely jack to do with the game itself, and almost zero with the several “primary” campaign missions I’ve played through. Specifically, pronouns, and a couple in-game references to modern #gate controversies.

In a stunning reveal, BattleTech, the new game from Harebrained Schemes (creators and now-masters of the Shadowrun series), will let you choose your pronoun when creating a character. This brave move shows a very progressive, forward-thinking side of the games industry not often seen. And that’s not the least of their contributions to progress in this big, beautiful game

Those bigots also seem to have a problem with the addition of Twitter hero Michelle Perez into the game as one of your squad members. If you’ll remember, she’s the proud transwomyn that gave Richard C. Meyer–of Diversity in Comix–a piece of her mind for disagreeing with an article of 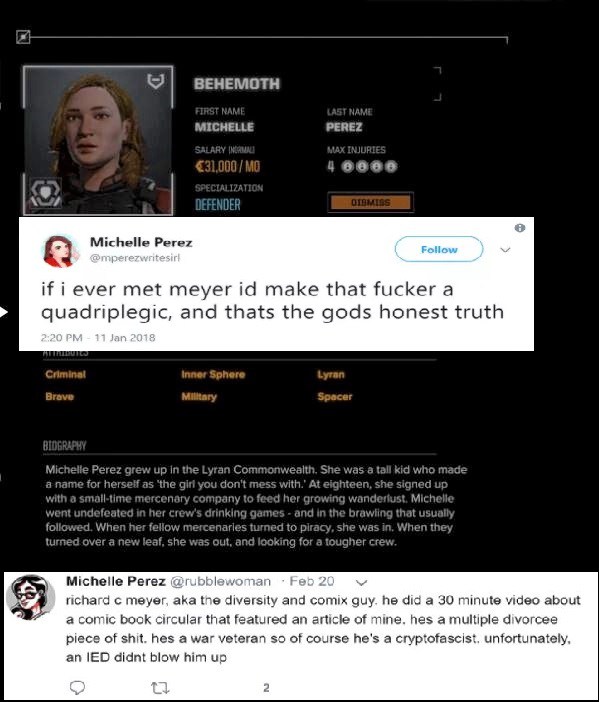 Harebrained Schemes also have rights to continue making the old, irrelevant BattleTech franchise relevant once again with future games. They even hinted at a sequel where something called “the clans” would be implemented. That sounds awfully close to a certain group associated with the letter “K”, though, so I’m hoping they’ll skip that section (it’s probably not important anyway).

Hopefully, future DLC will allow us to choose any and all of the LGBTQQIP2SAA rainbow, including customizable kins.

What a victory for social justice!

FWIW, even as an exaggeration, I doubt “millions” rejoice. [edit]* I’m not even entirely sure it’s not a parody. Especially given the utter lack of knowledge of the clans or even the most cursory attempt to look into the history of Battletech.*

And yes, they threw in a reference to a comics-gate related SJW who’s threatened Diversity & Comics. Not sure she wants to dwell on being assigned the call sign “Behemoth” though.

Needless to say, for those of you just joining the culture wars, these sites prove #GamerGate utterly correct in taking the stance that these people don’t care about what made games/comics/etc. great, they just want it to bend to their petty, tyrannical will.

As to the story, if you want to do a demographic tally, hispanics are both the good and bad guys (but it’s the noblewoman that’s the good guy, as well as several other movers and shakers you see of the nobility), the chief mech tech is Chinese (stereotype much? Also, looks more like a hipster with a tan…), and your command staff in general is a bloody Benetton ad. Your XO/ops guy is a black man named Darius, your later ops assistant, another hispanic guy, your navigator a Chinese woman, and the chief ships engineer you later acquire? Muslim woman complete with hijab.

My character is literally the only white male in the command staff.

So – you’ve got a pointless pronoun (and only one option other than the usual) for well under 1% of the population, even of those playing this game. You’ve got the obligatory diversity staff. And you’ve got specific “go gurl” references to SJW’s.

Honestly – if it hadn’t been purchased as a gift by a family member that wanted to play as part of keeping in touch across the country, I’d have handed it back for a refund. I’ve got Megamek, and I can run games using various available rulesets and some printed maps.