Above is a more one-sided than usual piece in terms of the internal content, but the headline is reflective of what even “mainstream” news organizations are publishing.

The short story is that in Portland, a group named Patriot Prayer scheduled a march. They had a permit for the march, had spoken to police, knew Antifa would be out to get them. Per the statement published via their facebook page, the police had assured them Antifa would be kept away.

Alongside the marchers was also a chapter of the “Proud Boys” – designated as a “hate group” by the SPLC despite not hating anyone based on race, color, or religion.

So the march is started, and as they come around a corner, are assaulted by “counterprotestor” Antifa who showed up. Per various reports from mainstream and *left *outlets, the “Anti Fascists” threw gravel, firecrackers, water bottles, eggs, and other sundry items before charging the Patriot Prayer march.

It’s worth noting that rocks and firecrackers may in some circumstances be considered deadly weapons, and can certainly put people in the hospital. That action, nevermind throwing stuff in general, nevermind charging a group of marchers on a permitted march, constitutes assault, or in some districts that differentiate, assault and battery. The water bottles may have simply had water but it’s been known in the past – Berkeley, forex, to have them frozen, or filled with concrete vice water. The fact that none of the articles mentioned that are neither proof for or against.

In short, Antifa showed up to someone else’s event, and explicitly started a fight where, given large groups of people (at least a hundred per side) where it would be difficult to get away. 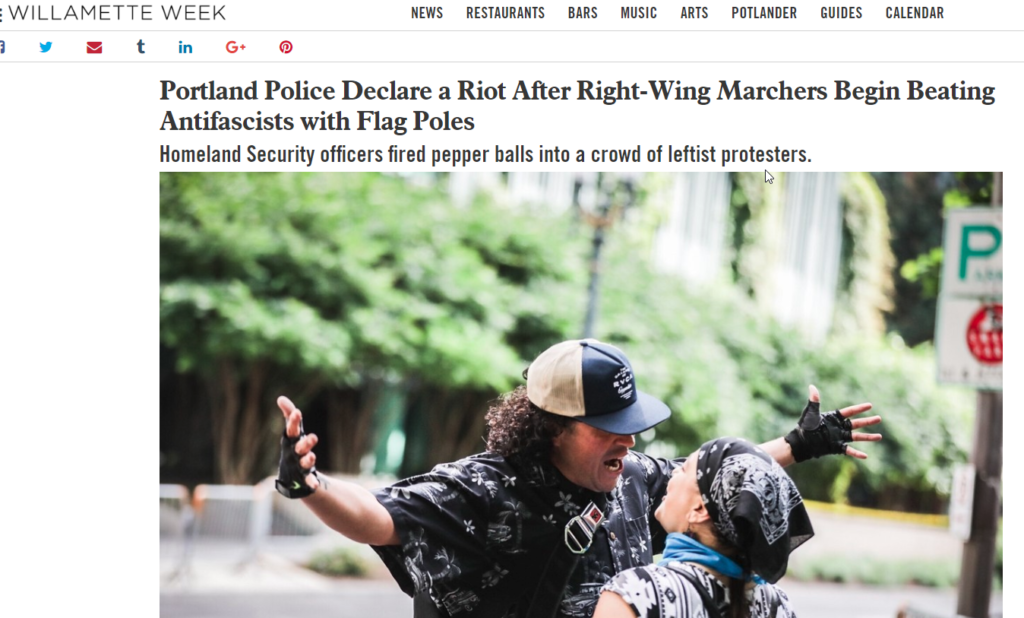 Ignore the subline for a moment – “Portland Police Declare Riot” – true, they did – “After Right-Wing Marchers Begin Beating Antifascists with Flag Poles”

I’m amazed the apparent disconnect of why the cops would be firing the pepper balls at the “leftist protestors” if they were not the instigators, and I’m not familiar with the WW, but I suspect this is a case of “fuck the fascist pigs” outlook causing a lack of disconnect.

But let’s take apart that headline, shall we? Especially because they actually, buried, deep down in the article, state that the Antifa side was throwing things and charged the marchers.

Wouldn’t know it from the picture though, or the headline.

I’m sure it’s technically, sea-lawyer wise, true that it was declared a riot after the Patriot side ceased to be passive recipients of violence.

Wouldn’t guess from just the headline that Antifa was an eager participant n the fight, specifically showed up at someone else’s event, was throwing things, and charged the marchers, and then the marchers fought back.

Or that antifa brought weapons – and not just those of opportunity but batons and clubs. The opening paragraph actually mentions how the Patriot Pride guys were allowed to keep their flagpoles/etc. – but again the headline and opening paragraphs make it sound like only one side was armed.

Also, gotta love the “flag poles” shiv – those racist “patriots” and their flags, are just concealed weapons for violence to beat down da brown people! Mother Jones writers are probably green with envy at that bit of wordplay. 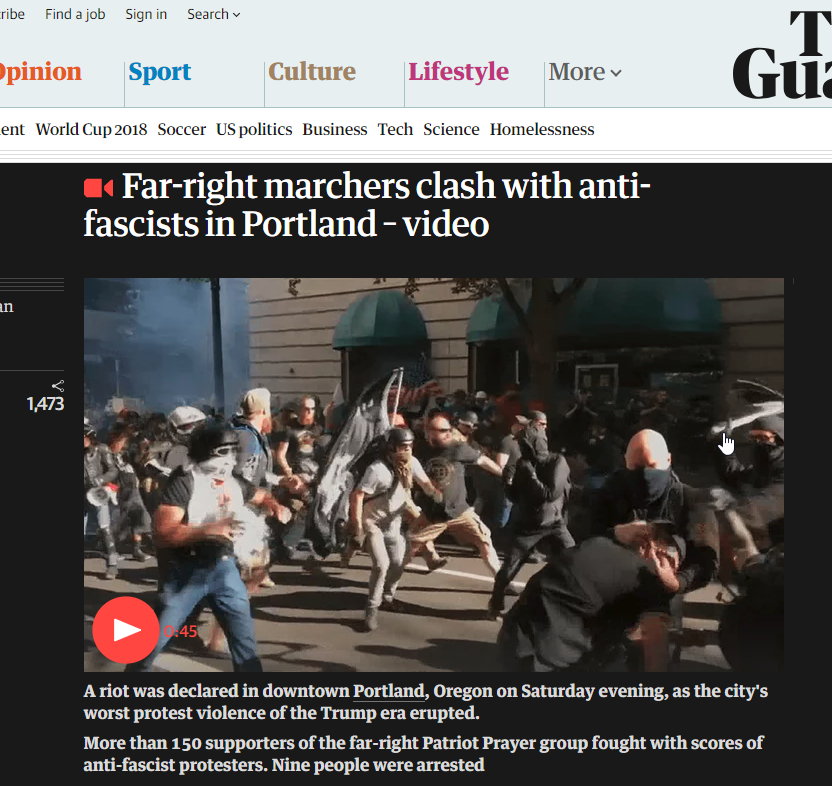 The main headline is a little more balanced. “Far Right” – hint, hint, “nazis” (thank you piss poor western Academia, politicians,and especially US education systems that bought the big lie about Nationalism being the problem, not socialism).”Anti-fascists” – most people know Antifa aren’t just half-baked socialists but full blown commies, and incidentally officially a terrorist organization in the US (I personally know of one vehicle in my area that had sported a sticker on its dashboard, promptly removed the day that was put in place).

“Trump Era” – another nice bit of “truth”, but stated in a way that gets “violence of the Trump era”.

“150 supporters” vs “scores” – again, technically the same-ish, but one sounds like a BIG number, while the other like a small one until you think on what a “score” is. Small plucky group stood up against a bunch of those f 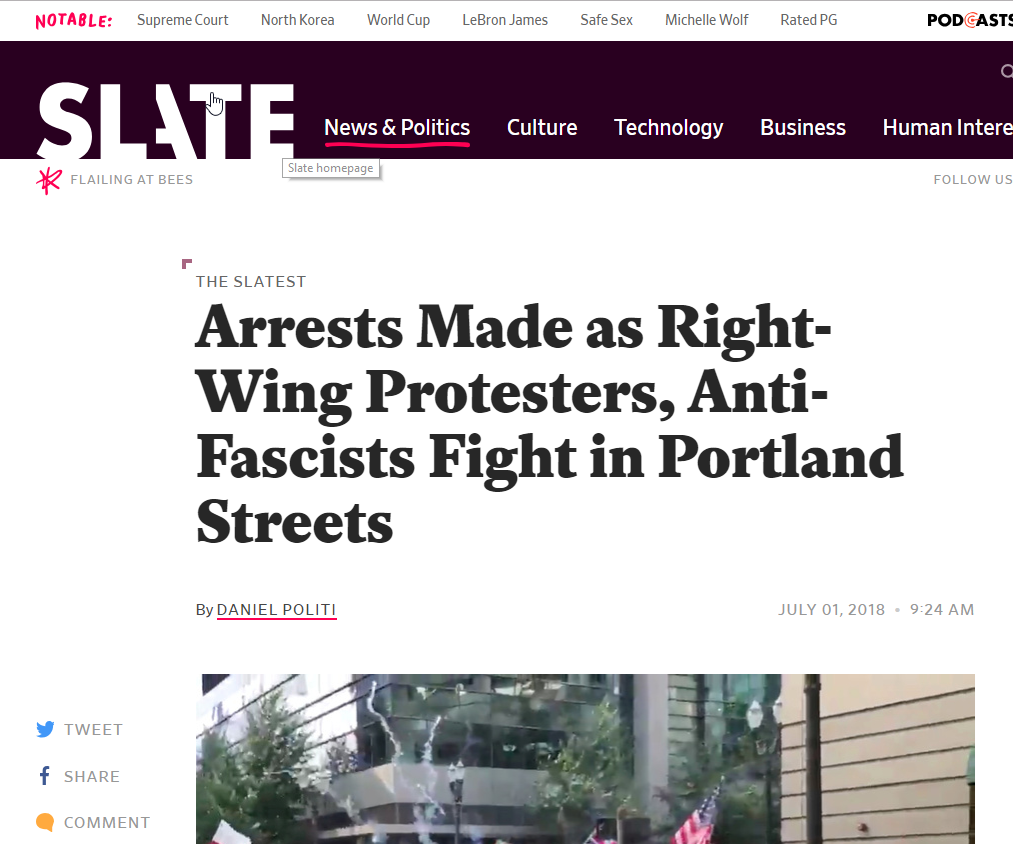 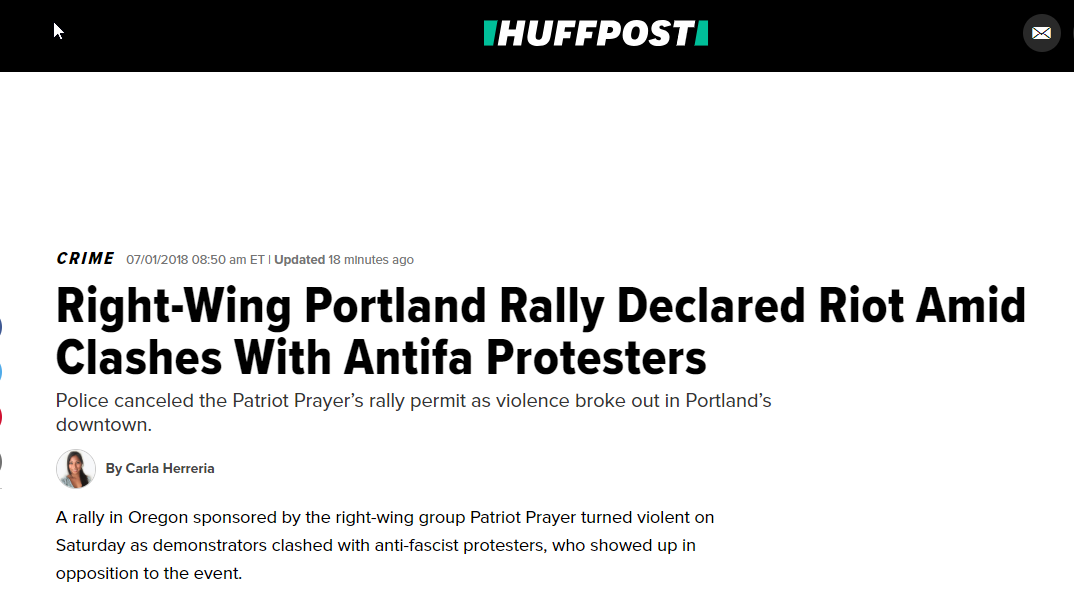 This is actually one of the worse headlines. “Right Wing Rally Declared Riot” amid clashes with Antifa protestors – sound skinda neutral but again the weighting – it’s not “rally attacked by communist protestors, becomes riot”.

At least the subhead begins to let you know that the leftists showed up to someone else’s event. You might almost be forgiven for wondering if they showed up to start shi

Hmmm… no mention of Antifa being armed with clubs, etc., but at least strongly implies that things that could cause harm were thrown at the marchers. Explicitly mention the Proud Boys being hated by the SPLC, but not a single mention of Antifa being a bunch of commie terrorists who go around beating up they consider insufficiently doctrinaire. False equivalence of “weapons were confiscated” – couched in the context of a right-wing event.

You can almost feel them having to grit their teeth at having to mention at all that Antifa showed up to fuck with someone else’s event, and did anything to instigate a fight.

Not much new – but it’s good to sometimes have a reminder that the press lies. It lies through outright making shit up at times, it lies by taking a clip and cropping it, editing it, and presenting it as something different.Most often it lies by omission and spin and framing. This isn’t just the “far” left, but even outlets considered mainstream. It’s been happening for years.

You can’t always avoid being the subject of a story, don’t voluntarily give them a quote. Don’t give them a chance to imply you’ve had your side represented fairly.