Cernovich, Scott Adams, and others have been discussing a recent mood change. 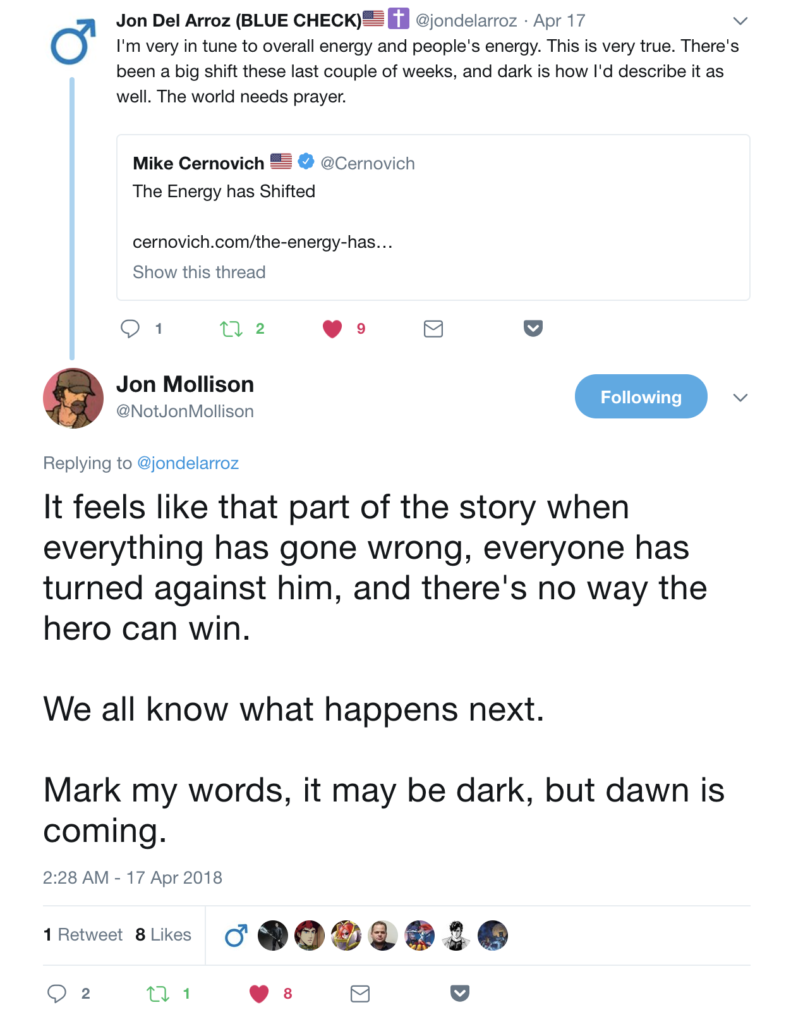 For what it is worth, and as I’ve noted earlier, there are times where I question what is “real” enough to at least be open to what the more materialist would term “woo woo”. At best. I hadn’t noticed a change in others, but I had noticed a change in my own mood – one more than a week ago.

It was odd. There was no particularly bad or ugly news, but somewhere, I knew stuff got real. I particularly liked how Jon put it. It’s why I’ve made several recent changes. One that should be obvious to you guys is that I started posting art on Mondays. The Friday stuff? Sure, everyone loves pretty girls, within reason – I have no intention to obsess over it – and a little beauty goes a long way. I felt the need to add man-made beauty, not just man framing nature’s beauty, or bounty, or… hey.

I also have an opportunity. In part borne of household changes that will result not so much in more free time, but in more productive use of my time – I’ll have more to focus, to work out in my gym, to work in my study. I intend to begin practicing music again, maybe even learn a new instrument (it’s been absolutely decades). I’m already drawing again, though at this point it’s more work on my ink and color rather that original drawings, but that will come as well.

In short, I’m beginning to create, to build. Time as well to work on my circle of friends. I know some good people online, but this purple pocket needs us to get organized, and I’ll have to do that carefully as well. Working on my people skills will be helpful as well.

As to the whole energy thing?

Well, you don’t have to believe in “the secret”, or magic, or heck, even that there might be something to the quantum consciousness model of reality – though the latter does explain why something like mantras, shamanistic magic, and focus would help things happen, almost by seeming coincidence. It may simply be that your focus on what you want, in alignment with your underlying needs, allows you to better see the opportunities and take advantage of them, or it may be that you also subtly warp the odds in your favor, just a little bit, just like everyone else does, but with purpose.

Nevertheless, you don’t have to have some supernatural aural attunement or anything like that – people’s moods transmit to each other, we are social animals after all, and you can see the change in body posture and emotional tone, even if it’s just a little bit, on average, even if you’re not consciously aware of it.

But I’m not ruling out a form of sensitivity to quantum shifts in the mood and focus of large populations around us either.